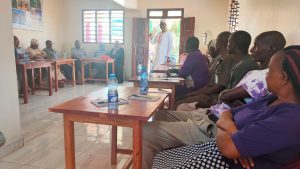 The Association of Evangelicals in Africa (AEA)’s “Msafara wa Upendo” (Caravan of Love) took its message of peace to Lamu County in an interfaith consultation bringing together Christian and Muslim religious leaders under the banner of the Coast Interfaith Council of Clerics (CICC). The meeting which took place on Tuesday 7th June 2022 marked the coastal leg of the Msafara wa Upendo project which covers 4 counties in Kenya: Nairobi, Lamu, Isiolo, and Garissa.

The consultation which brought together interfaith leaders discussed key issues and deliberated on strategies that can foster sustainable peace in Lamu, especially during the current political campaigns and as the general elections draw near. The CICC is a community platform where religious and political differences that threaten community peace and cohesion are discussed to promote peace and harmonious coexistence. They disseminate peace messages

through their religious platforms and sermons. CICC is also an arbitration body on issues between Muslims and Christians and facilitates intra and inter-faith dialogue alongside dialogue between those who are indigenous to the area and those that migrated and settled in the area. Their mandate has gone a long way in fostering unity among the people.

During the meeting, it was noted that 2014 was a pivotal year in Lamu as that is when a terror attack took place in Mpeketoni that led to the loss of several lives, injury, and destruction of property. This event raised fear, suspicions, anger, and enmity among people who had previously lived in peace and harmony for many years.

The participants pointed out that while the possibility of political and ethnic violence is not as high as many would expect, there is still a chance that some of those vying for political positions may incite the youth into violence. Citing some of the strategies that have been put in place by key electoral players, one participant quipped, ‘IEBC is to be commended in how they worked to separate the issuance of nomination papers. This reduced violence potential as competing candidates were kept apart. However, we should also remember that the post-election period also is critical to upholding peace. 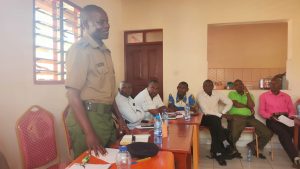 We need to have the contacts of the police/state security to do early warning as well as incident reporting. We also need to have magistrates trained on election offenses to attend some of these meetings to do voter education and bring us awareness’.

The clerics stressed the importance of conducting prayers for peaceful elections at every opportunity in their respective houses of worship. They also called upon the Independent Electoral and Boundaries Commission (IEBC) to hold free and fair elections, a fact that needs to be done and seen to be done. They agreed that they collectively need to remain strongly non-partisan to avoid creating divisions in the communities. The participants pointed out that among the issues that need long-term interventions are a review of the remuneration for Police Reservists and dialogue on the critical and sensitive matter on land.

At the conclusion of the meeting, the clerics mentioned the role that social media plays in promoting peace messages and urged the organizers of the consultation to consider building their capacity on its use.