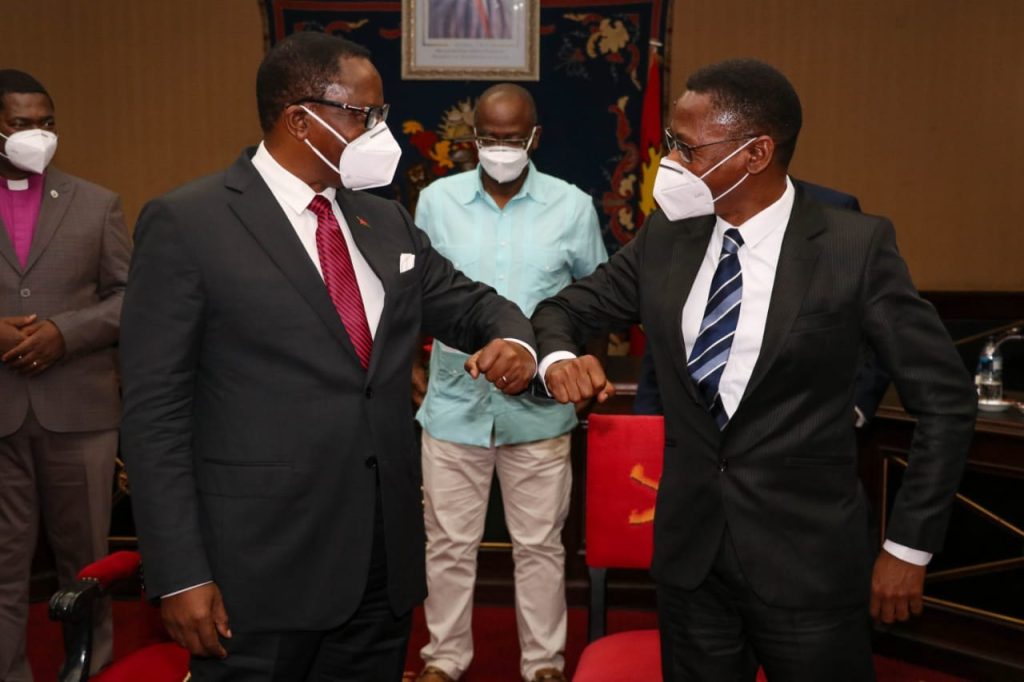 The President of the Republic of Malawi and Chair of the Southern Africa Development Community (SADC), H.E. Dr Lazarus McCarthy Chakwera,lauded the Association of Evangelicals in Africa’s (AEA) ambitious “Vision 2066” during a meeting with AEA leaders at Kamuzu Palace in Lilongwe, Malawi.

President Chakwera commended AEA’s new resolve to champion not only the proclamation of the gospel but also the demonstration of the gospel in its ministry to the Church in Africa. “I follow AEA news updates keenly, and I am overjoyed to see what the Church is doing in Africa. At the African Union we envisioned the “Africa We Want”, but to see the Church focusing first on what God wants for the transformation of the continent is powerful,” said President Chakwera. He added AEA’s vision is close to his government’s commitment to serve Malawi, which focuses on “The Chakwera SUPER HI-5”, an acronym for the five principles of Servant leadership, Uniting Malawi, Prospering together, Ending corruption, and the Rule of law.

The AEA General Secretary, Rev. Dr. Master Oboletswe Matlhaope, highlighted the significance of this new direction in AEA. In his address to the President, he said, “AEA intends to achieve its ambitious long-term vision of building ‘the Africa that God wants’ by the year 2066. The programmatic direction is for evangelicals to crystalize their values of love, peace, kindness, service, compassion, creativity, justice, and thankfulness into tangible projects that touch and transforms lives. Your Excellency, it is our solemn belief that through the effectiveness of the church, we can rid Africa, including Malawi, of orphans and street children, we can care for the poor, and we can develop the skills and talents of our youth.”

AEA leaders visited Lilongwe to explore how evangelical churches in the Southern African Development Community (SADC) region can stand together and counter extremism. The consultation was held amidst rising cases of religious extremism, specifically in Cabo Delgado Province in Northern Mozambique.

Bishop Paul Mususu, the President of the Evangelical Fellowship of Zambia (EFZ) and Regional President of the AEA Southern Africa region, commended President Chakwera for being one of the very few practising pastors to ascend to national office and lead with integrity. “I have listened to your vision for the nation and your speeches, especially the one eulogizing the late President of Tanzania, H. E. John Pombe Mangufuli, and found that you indeed carry our vision to transform Africa.”

The meeting came on the heels of President’s Chakwera’s decision to dissolve the entire cabinet over graft concerns. To Rev. Dr. Malthaope said this confirmed the President’s commitment to fighting corruption nationally, adding, “We view corruption as evil. It deprives the masses in our nations from accessing basic human essentials. This is a cancer that has impoverished our people in Africa and most developing countries.”

President Chakwera asked the global evangelical fraternity to keep him in their prayers as he seeks to transform both his nation and the region. AEA leaders affirmed their commitment to pray for him as he serves as the President of Malawi and a key leader in Southern Africa.

The meeting offered AEA’s leaders an opportunity to officially congratulate the President for his election victory after serving as the Chair of the Evangelical Alliance of Malawi (EAOM) for many years. The delegation highlighted what it meant for AEA to have one of its leaders ascend to the highest office in the nation. Rev. Francis Mkandawire and Archbishop Dr. Mark Kambalazaza echoed that President Chakwera is a model for Christians seeking political office and can become a “Barnabas” who encourages Christian leaders in our region to gain the courage to boldly serve in politics.